Showing posts from 2019
Show All

October 22, 2019
So, the idea with the Monotron was to ask a simple question - how much can we do with a small, cheap, random microcontroller and the Rust Programming Language. The answer, after some significant development effort, was quite a lot: 800x600 SVGA video signal, with 8 colours 48 x 36 text mode, rendered in real time, with multiple fonts (Code Page 850 and Teletext) FAT32 formatted SD Card support PS/2 keyboard over UART (because the synchronous PS/2 signals themselves were impossible to process whilst also doing the video) An application API, allowing applications to be loaded into the 24 KiB of spare RAM (out of the total of 32 KiB) which can then draw on the screen, read the keyboard, etc 3-channel tone generator, with Square Wave, Sawtooth, Sine Wave and White Noise Real Time Clock support That's quite a lot for an £11 dev board, with an 80 MHz microcontroller and 32 KiB of RAM. But ultimately, whilst it's impressive, it's not actually any use as a computer... S
Post a Comment
Read more

October 22, 2019
Oh, I totally forgot. I made Hackaday! And the comments didn't explode either...
Post a Comment
Read more 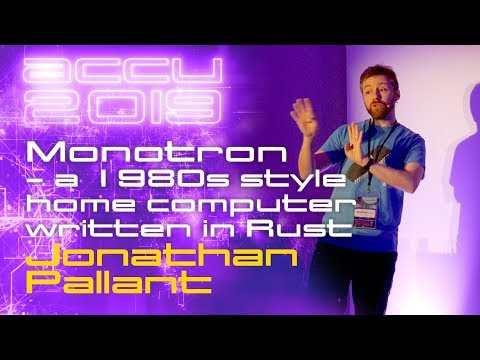 Well it's been a busy year. I was made Deputy Mayor of St Ives back in May 2019 and that has rather filled up the calendar. I also present Monotron at ACCU 2019 in Bristol, and again at RustFest 2019 in Portland, Oregon. You can checkout the videos below: I've also spent a lot of time thinking about interfaces on old computers systems - floppy drives, IDE, SCSI, Parallel Ports and more. This then lead to an idea for a more expandable Monotron which, with some help from SEGFAULT (Lauren) , turned into a thing called the Neotron. More on that next time...
Post a Comment
Read more
More posts